Asthma, hay fever and allergies – How to reduce or even remove your symptoms 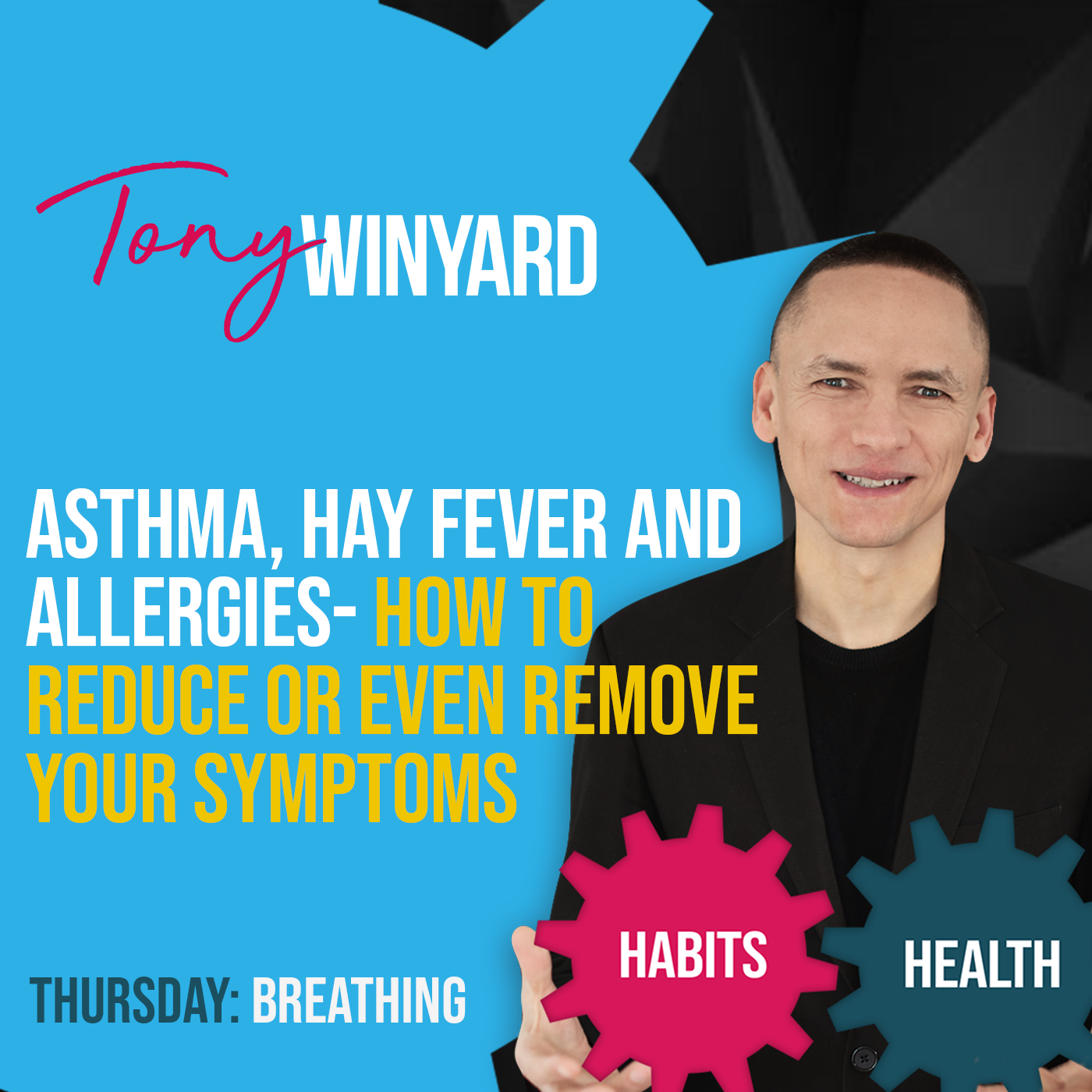 Asthma and rhinitis are closely connected, and if you had allergic asthma in childhood, you have a higher chance of having allergic rhinitis, usually known as hay fever.
The number of adults in many western countries that suffer from hay fever has increased substantially in recent decades to incredible levels, reaching 30% in some countries
There are 3 main types:
Seasonal is when you’re affected by things such as pollen.
Perennial is caused by things like dust mites.
and it’s known as intermittent when specific allergens are the cause.

The most problematic issue with hay fever for most people is the never ending streaming nose which causes a lot of sleep issues.
If you have difficulty breathing through your nose, you’re twice as likely to have issues with sleep, anyway.
These sleeping problems leave sufferers feeling tired on an almost permanent basis.
Nasal congestion can often lead to sleep disorders.

Watch my video on how to unblock your nose, which you’ll find a link to in the notes below, which will ease many nasal issues and reduce problems around sleep and hay fever.

Be careful with taking histamine to relieve your symptoms, as it affects the central nervous system and contributes to disturbed sleep.

One of the best ways to tackle this is to switch to nasal breathing.
Once you can reach the point where you breathe through your nose 24 hours a day,
and you’re talking deep breaths into the diaphragm, and breaths which are long and slow –
Practice this regularly, especially during meditation.
Try to take 1 or 2, 10 minutes sessions during the day.
Maybe one after waking and one before sleep, of sitting quietly and practicing this long, slow, deep breathing.
Which will calm and relax you, and the more you do it, the better your breathing will be.
As you continue to nasal breathe, you’ll also inhale more nitric oxide,
which will give you more protection against disease and inflammation, and the irritants that cause hay fever symptoms.

One goal is to increase your BOLT score, (Body Oxygen Level Test). The higher your BOLT score the less respiratory issues you’ll have, including asthma and hay fever.
Next week’s video will focus on the BOLT score and some practices that will increase it.

Here are some short-term solutions for hay fever issues

Follow the suggestions on the nose unblocking video linked to in the notes.
Repeat this for 5 reps. Depending on how severe your symptoms are, you may need to repeat another 5 reps.
Your nutrition and diet plays a role here and the more mucus forming foods you eat the more your nose will run.
Ideally, try to reduce processed foods and eat more wholefoods and vegetables and drink a lot of water.

Splashing cold water on the face many times during the day for its anti-histaminic effect will also help.

Thursday: Breathing
How quickly do you get out of breath when doing exercising or even when doing simple functional movement? It is one of THE biggest indicators of poor health. The more you get out of breath, the harder your heart is having to work and the faster your energy will deplete. If this is happening daily it will have an enormous negative impact on your health.
Upcoming events:
Free nutrition webinar at www.tonywinyard.com/webinar